Motor Vehicle Fatalities Up 9%; No Sign of a Decrease in 2016, says National Safety Council

If trend continues, U.S. may see its deadliest driving year since 2007 and deadliest Labor Day since 2008.

Itasca, IL – Preliminary estimates from the National Safety Council indicate motor vehicle deaths were 9% higher through the first six months of 2016 than in 2015, and 18% higher than two years ago at the six month mark. An estimated 19,100 people have been killed on U.S. roads since January, and 2.2 million were seriously injured[i]. The total estimated cost of these deaths and injuries is $205 billion.

The upward trend began in late 2014 and shows no signs of decreasing. Last winter, the National Safety Council issued its largest year-over-year percentage increase in 50 years, when it estimated fatalities had jumped 8% in 2015 compared to 2014. The continued rise in fatalities is prompting the Council to issue its highest fatality estimate for the Labor Day holiday period since 2008. NSC estimates 438 people will be killed during the three-day holiday weekend.[ii] 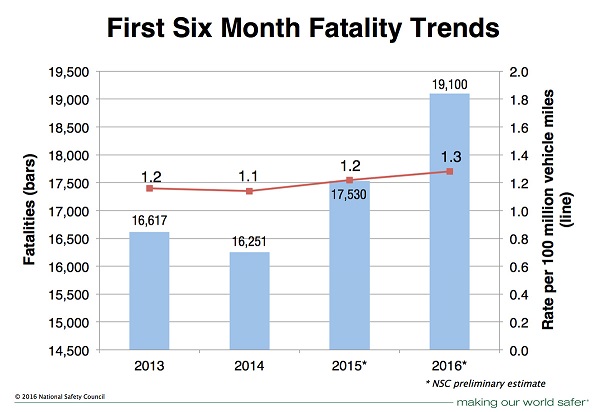 “Our complacency is killing us,” said Deborah A.P. Hersman, president and CEO of the National Safety Council. “One hundred deaths every day should outrage us. Americans should demand change to prioritize safety actions and protect ourselves from one of the leading causes of preventable death.”

While many factors likely contributed to the fatality increase, a stronger economy and lower unemployment rates are at the core of the trend. Average gas prices for the first six months of this year were 16 percent lower than 2015 levels, helping to fuel a 3.3% increase in the number of miles driven.

Join us for the 2023 ASC Annual Meeting