The standard 3 point seat belt system consists on a shoulder and lap belt which are connected to a buckle, retractor and anchor. The retractor allows the webbing to be pulled in and out as the occupant places the belt on or off. The buckle allows for the easy attachment of the belt by the occupant. The anchor provides the 3rd connection to the vehicle. The system can have buckle or retractor or anchor pretentioners, load limiting,switchable load limiting, crash sensing, web sensing, occupant size sensing, height adjusting and of course carries the load of the crash of the occupant. 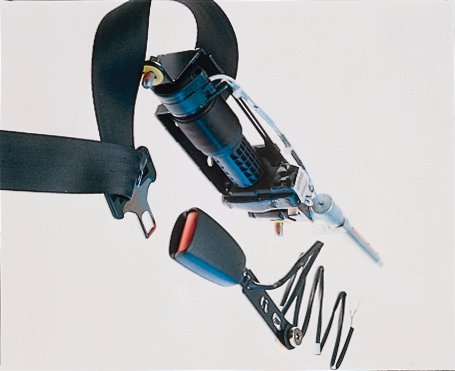 The Active Buckle Lifter (ABL) makes buckling the seat belt easier and more convenient by electrically lifting the seat belt buckle. The ABL lifts the buckle past the center console between the seats, and beyond the jacket or other objects that can hide the buckle. The more “reachable,” ABL can assist elderly or other occupants with reduced mobility due to health/disability challenges.

During dynamic maneuvers the ABL acts as a reversible buckle pretensioner and adjusts the seat belt slack to better position occupants in their seats. This pre-pretensioning can be activated using data from active safety systems, such as Electronic Stability Control and Brake Assist systems, as well as environmental sensor.

The active seat belt can be activated using data from active safety systems, such as the Electronic Stability Control or Brake Assist systems. It can also be triggered by data from environmental sensors, such as radar that provides the relative speed and distance to the vehicles ahead.

Once activated, it puts front seat occupants in a better position by keeping them more snug to the seat and lessening the forward movement of the body and is a great example of the integration of active and passive safety systems.

The Active Seat Belt System links active and passive safety systems. It is a reversible seat belt retractor which can be activated prior to a crash. The Active Seat Belt is designed to use braking and stability control sensor information to sense a potential accident. It reacts by securing the driver and passenger seat belts by removing seat belt slack so the occupant position on the seat is improved in advance of an impending crash.

In approximately two thirds of crashes, the actual event is preceded by hard braking, sliding, and skidding. Car occupants – even wearing seat belts – could be not in the optimal position with respect to airbags. If car occupants were placed in such optimal position, injury probability could be significantly further reduced due to improving the overall restraint system performance.

It uses a situation management algorithm to continuously process signals from the vehicle’s relevant system sensors such as ABS or electronic stability control. The algorithm evaluates exceptional driving events such as panic braking and skidding. In case of a recognized critical situation the ACR2 “pre- pretensions” the seat belt thus bringing the occupant in a better positioning prior to the crash.

Unlike pyrotechnic pre-tensioning devices, if the critical situation ends without an accident, the system automatically releases the belt. It is a fully reversible feature.

Data from a radar interface can be used to activate the retraction – as can other signals from environmental sensors. Once the buckle is engaged and the vehicle reaches a specified velocity, the ASB initiates a slack removal function to reduce the belt slack.